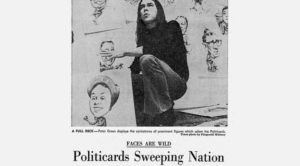 A disheveled, determined Sen. John Tunney is caught primping painstakingly before his boudoir mirrorcomb guided by a nearby portrait of John Kennedy.Tricia Nixon, overwhelmed by a mass of blonde hair and an angelic smile, has become a Playboy bunny.

Gov. Ronald Reagan, reduced to a paroxysm of uncontrollable rage, grits his teeth, clenches his fists and stomps a hippie.

Martha Mitchell is lying abed with a telephone, a martini and whimsical grin; Lyndon Johnson, looking like a toothlessly benign granny, serves up a barbequed bomb on a bun, while Sen. Edward Brooke blithely chomps watermelon and J. Edgar Hoover lecherously peeps through somebody’s window.

And so on.
But all in jest, of course.

It’s only the latest bit of slick political satire to sweep the nation, winning the hearts of harpoonery hounds everywhere, threatening even the heretofore unchallenged throne of Spiro Agnew wristwatches.

They’re called, aptly enough, Politicards. Full decks of plastic-coated, non-frayable living-color playing cards, which bear the bitingly humorous caricatures of 50 percent of the country’s most powerful or prominent political figureseverybody from a rat-faced, ermine-clad Richard Nixon (king of spades) to an evil-eyed smirking Billy Graham looming over a flock of frightened sheep (5 of clubs).

Since they went on sale nationally about two months ago, at $3.50 a deck, Politicards have been snatched up by everybody from a right-wing Orange County bookstorethe nation’s largest distributor of American Flag decalsto underground purveyors of anything that’s irreverent or anti-Establishment. (In Los Angeles, they’re on sale at most May Co. stores, as well as several smaller shops.)

Even a few of the victims themselves, or their kindred, have been buying the cards.

The quick-witted mind behind America’s latest snicker at itself is a fast-rising young talent of the caricature world named Peter Green, 26.

Sitting in the clutter of his tiny Sunset Blvd. Studio, the long-haired, mild-mannered Green describes his cards as “a sort of educational poor man’s political Who’s Who.'”

And he doesn’t think any of his caricatures are unduly harsh on their victims- not even Sen. Edward Brooke (four of clubs), whose portrayal as a watermelon-eating Uncle Tom has caused some leading department stores to refuse the cards.

“I don’t think any of the caricatures are out of context in the political game,” said Green. “All of these people, including Sen. Brooke, are used to being needled. Actually, I think the cards are, comparatively, sort of innocent and light-hearted in their approach.”

Adverse reaction to the Brooke card, he speculated, “is probably just general squeamishness because of the country’s continuing sensitivity to the entire racial issue.”

If anything, Green thinks some of his cards may be too mild. Chicago Mayor Richard Daley (10 of diamonds) stands innocently holding his suitcases, ready to take off on some new venture.

“I’ve had a lot of criticism on both of those cards for not coming down a lot harder,” said Green.

He’s also been criticized, he says, for including only six women in his deckthe three Nixons, Mrs. Mitchell, Lady Bird Johnson and Jane Fonda.

“I’m no sexist I just couldn’t come up with any other politically active women whose faces are commonly recognizable to the public.,” Green explained. “Even using Jane Fonda was stretching it some, I thought.”

In selecting personalities for the deck, Green sought figures who were not only politically prominent, but whose facial features or personality traits lent themselves readily to the art of caricature.

“Some people have faces that are just blahlike Gerald Ford (House minority leader). And Tricia Nixon. So I had to play with their personalities instead.

“For example, I’ve always thought anyone who comes on as sweet and proper as Tricia Nixon might have some secret desire to really let go somedaymaybe become a Playboy centerfold. So I made her a bunny.”

“Maybe he’s fulfilling some early urge to belong to a teen gang, but is turning it into a positive goal, not a negative one,” shrugged Green with an easy-going chuckle.

As much as anybody, Green is fascinated by the public’s perpetual enthusiasm for the ancient art of caricature. But he thinks the explanation is probably simple.

“In caricature, you usually put a big head on a tiny body. And you focus on certain irregular, striking features of the subject’s face. The result is that he looks funny.

“If it’s someone powerful or famous, he also loses his altitude by becoming ludicrous. And people like to laugh at those who are in society.” 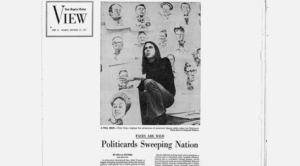